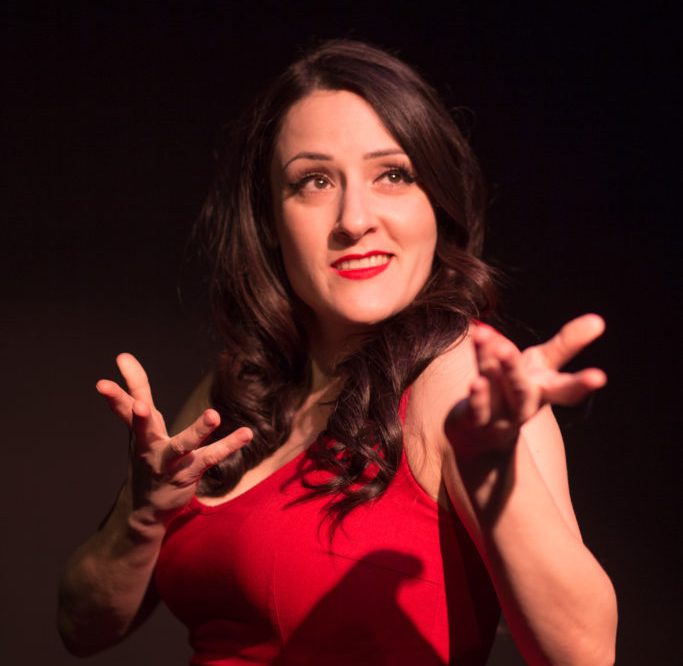 Jill Vice saunters onto the black stage, her razor red lipstick sharpened for a thorough examination of the heart. She speaks with a period-style trill, a trill that shakes the word “murder.” And there are feet. And there is the agony of da feet.

In her one-woman show “A Fatal Step,” Vice puts the film noir genre in her crosshairs, a genre that often gave the female short shrift. Eyes were batted with a slight downward tilt of the head, piercing the dominant, alpha male as he takes full charge of the scenario. But this time, it’s the female that refreshingly tells us what’s up.

The show, which runs through April 28th at the Marsh in San Francisco, is wickedly fun, a piece that revels in the pleasures of anachronism. It features a female character plopped into modern day San Francisco, loaded with the City’s plight with issues such as homelessness and even introducing a sage Lyft driver that spits wisdom from the front seat of his personal vehicle.

Vice, who penned and performed the show that is now on its first extension, is a crisp 60 minutes where, in the spirit of solo performers, she plays multiple distinguishable characters. There are hints of those characters that are rooted in the history of the genre, the Humphrey Bogart type that stayed as cool as 10 cucumbers in the face of mounting, personal turmoil.

In this piece, the bored Frank, a podiatrist by trade but a bit of a scum bucket by choice, has the siren Sarah in the palm of his hand. It is Sarah’s point of view that gives us all the information we need. Sarah is locked in a bit of a death battle with the younger and unassuming Hope, a woman that tells Sarah all the right things, but just might have something sinister up her sleeve too.

It is clear to anyone who watches this piece move through space of the reverence that Vice and director Mark Kenward have for the genre, and there are touches of that dotted throughout the uninterrupted hour. Even something as mundane as the soloist drinking water on a scene change is handled with aplomb. Notice how Vice, as she stands and faces upstage, shifts her body in a tilt and drinks water out of a wine glass with a hint of bravura. What is simply a scene change in this instance becomes a unified transition.

What this piece does well is points out the sheer theatricality and showmanship of the genre. Plots and storylines can easily fall into the ridiculous, and this piece showcases the low morals that characters carry, people you would never want to call friends. Vice’s writing uses this to her advantage in various forms, and even brings in some great and terrible jokes in the extremely marketable “foot humor” genre.

Certainly, pulling off a genre such as this in a solo form requires certain aspects of unity, and this is where this piece works effectively. The lights have hints of hue and shadow, even producing a hilarious send up of the opening scene of Alfred Hitchcok’s masterpiece “Vertigo.” And a fight scene that takes place between all three of the principals is sheer hilarity, with Vice displaying her physical, comedic chops as she beats the crap out of herself.

It’s always such a joy to see when different genres and anachronisms can work together to reveal a unique result. Vice is a wonderful performer and creative writer, and no doubt she and Kenward have had quite a time concocting the playground using film noir as the jumping off and landing point. And if a playwright were to be compared to, say, a gardener, Vice gardens with quite a green thumb, and in her pen lies a very special “fertilizer.”

You’ll figure it out.

The Marsh presents “A Fatal Step”
Written and performed by Jill Vice
Developed with David Ford
Directed by Mark Kenward
The Word: A fun send up of the film noir genre, featuring a talented performer and writer in Vice.
Stars: 4.5 out of 5
Thursdays at 8 pm, Saturdays at 8:30 pm
Running time: 60 minutes, no intermission
17+ only
Through April 28th
The Marsh
1062 Valencia, San Francisco, CA 94110
Tickets range from $20 – $100
For tickets and information, call (415) 282-3055 or visit the official website.