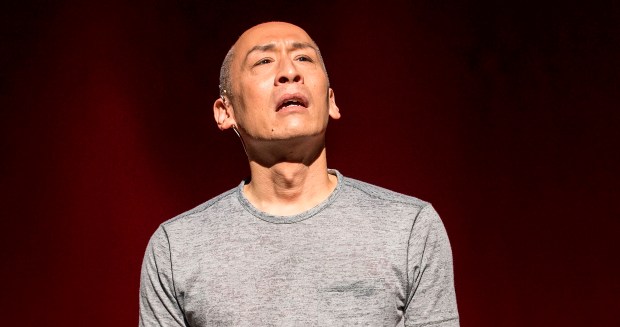 In the past few years, I have fallen in love with a few things.

And then there’s Korean Food. A Bonchon is opening around the corner from my house, and I check everyday to see if today is the day – the day where my life gets a little more delicious.

In watching the stupendous new production of “Soft Power,” now playing at the Curran through July 8th, I learned that the title of the show is also the title of the phenomenon I have discovered with Korean culture. It is the relationship we have with a specific culture, the power of a country to bring us into its cool factor. Music, trends and fashion are just a few things that give a culture strength and accessibility.

The show explores this phenomenon with rousing gusto, fusing plenty of musical theatre styles to display one deliciously cohesive production.  If you have even a slight interest in musical theatre, you will catch plenty of those clichés – the heavy breathing after a power ballad, characters crossing downstage away from their lover for no apparent reason, a rooftop scene stolen straight from “Phantom of the Opera” and some badass rap music cascading down out of nowhere.

The creative team on this show are top-notch, theatre studs. There are the words and ferocity of David Henry Hwang, the silky smooth and delightfully varied compositions of Jeanine Tesori and sharp direction by Leigh Silverman. And you can’t forget about the effective, controlled chaos of Sam Pinkleton’s choreography, which made the stage a massive dance playground.

Globally, the United States’ soft power is taking a bit of a hit at present. This was not a surprise to Hwang, when the presidential election of 2016 was won by a nationalist, jingoistic xenophobe, shredding his predecessor’s policy in record time, that predecessor whose power was as soft as a bed of feathers.

In the show, which features a Hwang signature move where he plays himself a la “Yellowface,” he is the Tony Award winning playwright, which gives him serious clout with a new Chinese studio who wants to hire him. Hwang (a delightful turn by Francis Jue) is brought into the newly formed Dragon Media Studios of Shanghai to develop a sitcom. There is one stipulation – there can’t be anything that paints China in a bad light.

This is problematic. One of the strengths of American film, it is argued, is that there is no resistance to portray something in an unfavorable light. American film is at the discretion of the filmmaker, constructing an image that pays homage to a director’s artistic vision. And sharing both the great and ugly of America humanizes the subjects for both examination and resolution.

While Hwang ponders this new potential opportunity, a traumatic event occurs (one that is based on a real-life event) catapulting him into the future, an ethereal world of song and dance.

Using Rodgers and Hammerstein’s “The King and I” as the launching point comes the new musical within a play, a re-imagining of a classic tale. For the more modern and cynical theatre goer, “The King and I,” is basically about a white savior who comes and teaches the perceived backwards country of Siam how not to be so, well, Siamese. But it’s so sweeping, and beautiful and the dress, and shall they dance, and you know, it’s gotten a lot of Asian performers jobs over the years, etcetera, etcetera, etcetera.

Hwang himself admits to having quite the chasm with the show. He has stated in interviews how much he loves it, cries at the end of it, but is also not immune to the problems of representation that exist within the show on a cultural level.

Where “Soft Power” finds its brilliance is looking at a similar style of show but looking at it through a Chinese lens far into the future. What follows is a sharp send up of the ridiculousness of how Americans perceive other cultures and how we process absurd love stories, this one involving Hillary Clinton (a wonderfully pedantic Alyse Alan Louis) and the dashing Xue Xing (played on this night by golden-throated Billy Bustamante).

Take the hilarious number where the beauty of accents in certain Asian languages is explained, except that Hillary butchers the heck out of it all, showcasing the ugly Americanness of nuance dismissal with reckless abandon. And then of course you have all the craziness of the American diaspora –wild dance breaks, a crapload of blondes, our unhealthy obsession with golden arches, the absurdity of the electoral college and a guy named Bobby Bob who seems to appear out of nowhere all the time, ready to throw down and gun battle.

Even though the action slows a smidge in Act II, where the play is at its best is when it sets a high target. It may be a satirical, skewered view of who we are as Americans, but is that skewered perception that far off? While there are laughs and musical theatre tropes aplenty, sometimes it feels as if this play is less fiction and more documentary. That’s a bit disconcerting, but poignant. A musical that goes right after the current presidential administration was just a matter of time, and now that it’s here, others will follow.

Think of it as a gun battle, but instead of bullets, those chambers will be loaded with a whole lot of showtunes. Which is fitting – in the current American political chaos, musical theatre is definitely one place where our soft power hasn’t taken a hit. And when the president insanely tried to call for a boycott of Hamilton?

Even softer. And that, friends, is what I would call a “mic drop.”