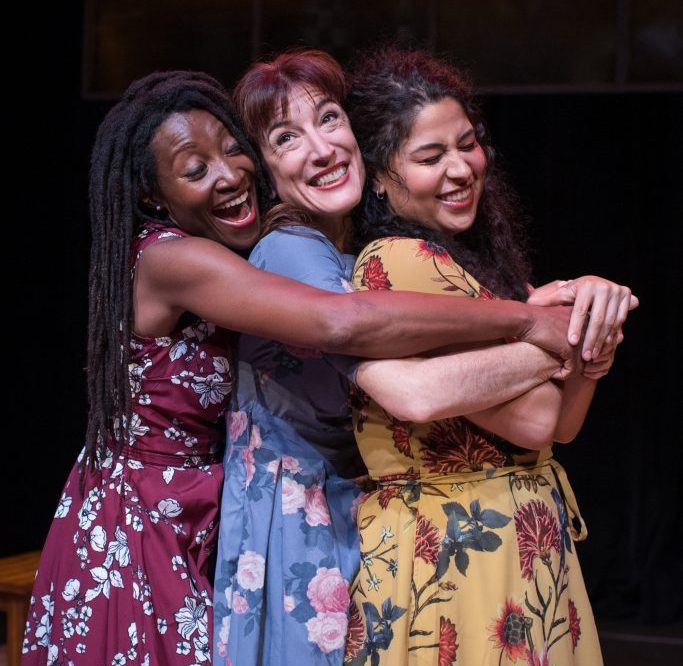 The three lovely pastors have been working on something, and when they unleash, they unleash hard.

By my own count, I saw at least five classic dance moves. There was certainly a choo choo train, definitely a cabbage patch, and you can’t go wrong with thunderously passionate jazz hands. And there was that slickly choreographed jaunt where you line up and face forward, and at the right moment, move to the left or right. That’s a pretty sick move.

This take on praise dancing was not only heartfelt and earnest, but funny as all get out. But there was one person completely pulling my focus, another layer of hilarity in what felt like the fastest yet never-ending routine in church history. That person was Pastor José, who watched the ladies as they shook what their maker gave them. He stood off to the side, observing the proceedings with a smile that was half pride and half creep, shaking his shoulders, and feeling the spirit overtake him.

And then, it hella overtook him.

Moments like these are what make Crowded Fire Theatre’s production of Young Jean Lee’s 2007 play “Church” so great. With a tight cast of four who mostly hit their acting targets, the show is steadfast in its commitment to goofy non-sequiturs, a ton of chicken blood and smiles that make Batman nemesis the Joker look positively melancholy.

The play, directed with great, pointed economy by the company’s artistic director Mina Morita, does what lots of church services do – go right for the big, overbearing and uncomfortable welcome. We see that in the staging, where plenty of moments feel as if they are going on way too long, in this case, by design. They start by walking down the aisle shaking hands with the audience, or in this context, churchgoers.

Lee’s play wastes little time in attacking conventions, challenging religion from the get go. A play that times out in the 60-minute range, it has little time to waste. The play starts off with a lengthy monologue done completely in the dark by Reverend José (a sharp Lawrence Radecker) from the rear of the theatre, Lee goes right at those in the audience who now double as worshipers, wasting no time labeling them Pharisees. It’s as direct as it gets – the group was an ancient Jewish sect known for their strict, unbendable rules and feuds with Jesus, a man who broke rules, took on the form of a servant and served those in need. The darkness allows for an undivided focus on Lee’s text, words that do not compromise the playwright’s sharp and cynical feelings towards religion and piety.

The brilliance of Lee’s words come from her sharp, biting satire. How else to explain those four pastors with perfect incisors standing amongst the congregation, sharing how blessed they are, with their great lives. It’s almost like God gave them the fat hookup. Maybe those who have nothing need to pray harder. And if it doesn’t work out, harder still. It’s reminiscent of those prosperity preachers, folks who use their pulpit to request tens of millions for things like private jets, giving out magic water as a thank you. Or, to use a different term, water.

These four folks are feeling themselves. The praise team is led by José, along with the young Reverend Jordan (Jordan María Don), who represents the future, along with fellow passionate reverends Nkechi (Nkechi Emeruwa) and Alison (Alison Whismore), who all wear dresses that are probably inspired by flowers in the Garden of Eden, designed by Alice Ruiz.

The production’s strength is in how it goes about exposing these truths with fantastic laughs. Us in the audience are stuck in Loserville, and all we need to make it better is embrace our inferiority and let God take the wheel. They were losers too, and now they’re winners. It’s a bit insidious, but also a great road map for the searcher.

This is where churches and places of worship come in. They fill a void in our lives, providing us with a spiritual center, comfort and give us fellowship in our time of need. It allows us an opportunity to embrace the purpose we crave as humans.

The blurred lines of the show are what makes the production a brilliant one. It’s a bit confusing to see where the play stops and the church service starts. There are long, rambling sermons that make little sense, where the fellow reverends shake their heads in the affirmative as their lives change before our eyes, with some in the audience buying in with amens and head shakes.

“Church” is a hilarious and crazy spiritual ride, one that is hard to disconnect from. But rest assured, if that connection is waning a bit, there are plenty of sick dance moves that’ll get you back on track along with a nice, musical surprise that awaits in the end.

Can I get an amen?