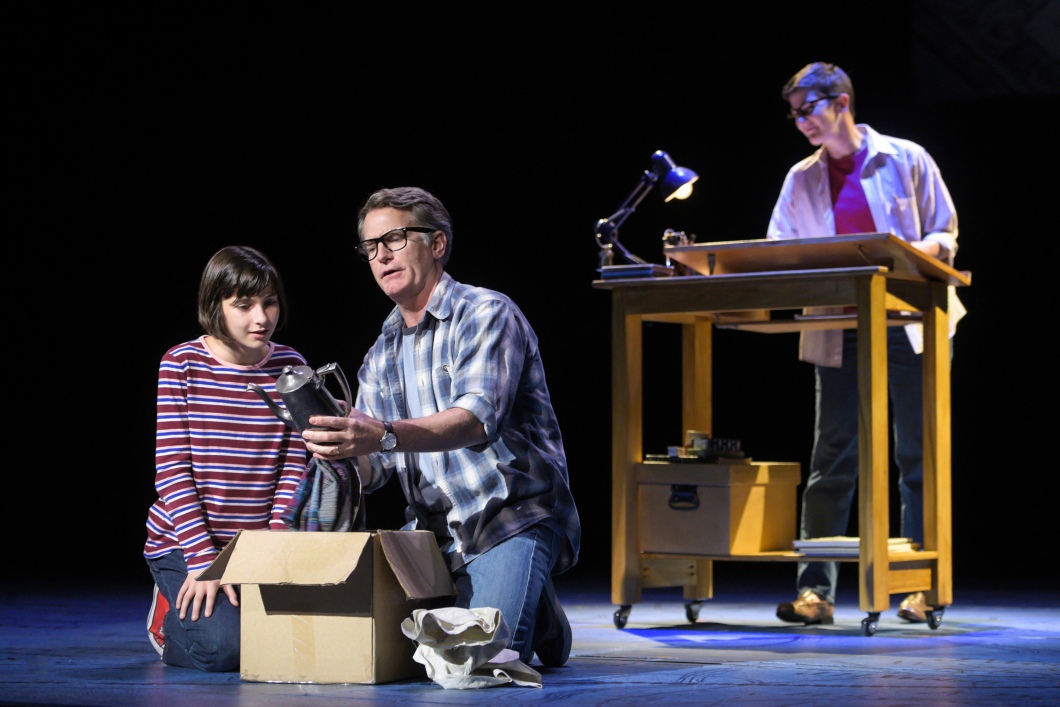 “Sometimes the fire burns so hot, I don’t know what to do.” – Bruce Bechdel

There are some incredibly tender yet cringy moments in the marvelous production of “Fun Home” at TheatreWorks Silicon Valley. And we get to view these moments as they are experienced by the narrator Alison Bechdel.

Take the moment where Alison sings along with the small version of herself and her brothers. “Welcome to the Fun Home” is a delight, a Jackson 5-infused poppy hit where the three charming kids break down why death is so much more fun at the Bechdel’s funeral home. All funeral homes offer smelling salts, but their smelling salts shred with soulful funk. Just notice Alison bopping along with the kids as she recalls the memory as she constructs her memoir. In this home, where nice memories were at a premium, it’s terribly delightful and genuine.

And then peek at a moment more intimate between Medium Alison (a delicately questioning turn by Erin Kommor) and the lovely, social justice warrior Joan (sassy and sharp Ayelet Firstenberg). When Joan is nearby, Alison struggles to get a coherent thought through her lips, probably because she is thinking about nibbling on Joan’s. What is so perfect in this moment is how the present Alison can barely stand to remember what that event was like. It was so clear to Joan, who easily figures out Alison is gay just based on the books sent to her by her father.

What works so magnificently in this production, directed with swift and deft touches by Robert Kelley, is how detailed it is. If you’ve read the book, those touches are easy to pick out. Alison (heartbeat of the piece Moira Stone) is putting together her graphic novel, the 2006 “Fun Home.” To do this, as she sits on a drafting table, she constantly reflects on the events that led to not only her own sexual awakening, but that of her father Bruce (a tragically empathetic and effective James Lloyd Reynolds), who spent his life hiding his.

Bruce probably has never known a life that wasn’t being shredded by the chasm of his existence. So, the crushing devastation of his life, exemplified painfully throughout as he made bad choice after bad choice, ultimately leads up to his one perfectly-timed moment of clarity.

There are so many beautiful things in the show, brilliantly composed by Jeanine Tesori with a libretto by Lisa Kron, easily one of my favorite pieces of musical theatre. What is so effective is how the music reflects the lives of his inhabitants, loaded with leitmotifs and specific touches. It’s an example of high-level chess, played out in front of our eyes, for our ears, with grinding pathos.

Take the precious “Changing My Major,” a song that is equal parts chills and tenderness. What is so wicked smart about this song is how it moves. There are such huge, thrilling discoveries for Alison, a young girl new to college, scared to death about entering the school’s gay student center to check it out. The song does not move in a linear or consistent way, but rather its different moments take us through Alison’s mind so effectively, with some gentle tears flowing as she expresses how she is feeling. She’s thrilled. She’s confused. She’s scared. But she is changed, and she is free.

And of course there is “Ring of Keys.” As much as I really love the music top to bottom, this song just may be my favorite, with the most precious and perfect discoveries of a little girl towards a delivery woman in a diner. And when she changes one word, which is never not tear-inducing, it is so, so perfect. What Small Alison sees, discovered effectively by Lila Gold, sharpens the song.

There are really two heartbeats to the show. The first is between Alison and her father. There is clearly a bond between the two that manifests itself in some odd, telling ways. How about that moment where Bruce and Small Alison disagree about her wearing a dress? Bruce is working hard to subscribe to the social mores of keeping up appearances, whereas Alison is already loaded with a hefty helping of pragmatism. And then there is the unsung hero, the mother Helen (a tortured Crissy Guerrero), who has given up so much, for what exactly? A woman with so many talents, leaving a New York acting career to live in a restored museum with misery adorning every detail, every wall, scenically designed with great detail by Andrea Bechert.

Their first trip to Europe as a married couple was quintessential Bruce – joy in one moment, rage in the next. And Bruce’s countless affairs she endured while suffering in silence led to some of the most heartbreaking advice she gives to Alison, advice she offers with a stoic and suffered poignancy.

While “Fun Home” is a show about one gloriously dysfunctional family, those recollections are no different than many of our families. And despite the difficulty of Alison’s recollections, she speaks in her book of specific bonds with her father, bonds she did not want to let go. There is such beauty and grace in her pursuit of perfect balance, and when that pursuit is achieved in those decadent moments, it’s warm, tender and it soars magically.

TheatreWorks Silicon Valley presents “Fun Home”
Book and lyrics by Lisa Kron
Music by Jeanine Tesori
Directed by Robert Kelley
The Word: A wonderful show given a marvelous production at TheatreWorks
Stars: 5 out of 5
Based on the 2006 graphic novel by Alison Bechdel
Mountain View Center for Performing Arts
500 Castro Street, Mountain View, CA 94041
Through Oct. 28th
Tickets range from $40 – $100
For tickets, call (650) 463-1960 or visit theatreworks.org