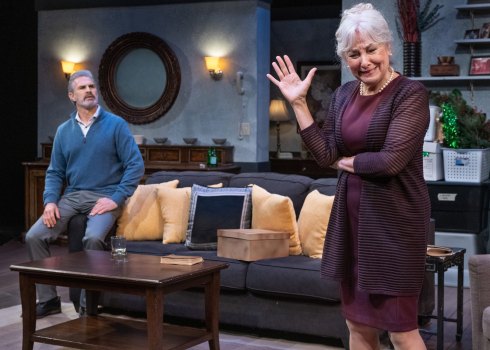 When Katharine’s son Andre played Hamlet in New York, there was a moment when he uttered these words:

Andre was one of the millions of gay men who succumbed to a disease seen as a Shakespearean plague, a complex pandemic that was believed to only afflict gay men. But for a woman like Katharine, there were no complexities in the disease, nor in her son’s “choice.” If one didn’t want AIDS, stop being gay. Make a different choice. Katharine is of the belief that everything is a choice, why is sexual orientation different?

But at some point, what choice did Andre have? He was 29-years-old, at the precipice of the greatest years of his life, now resigned to seeing each shred of his dignity stripped away by this vile, vicious and cruel disease. When this beautiful, imperfect sparrow finally fell, the earth met him not with dignity, but a stigma – another gay man dying from the “gay plague.”

There are so many layers to the wonderful production of Terrence McNally’s powerful “Mothers and Sons,” playing through Feb. 17th at City Lights Theater Company in downtown San Jose. Director Jeffrey Bracco leads his actors down some emotionally demanding rabbit holes, and what comes up on the other side is full of surprises that are infuriating yet mesmerizing in their discovery.

You clearly sense that the 20 years since Katharine (a wonderful, varied turn by Lillian Bogovich) buried her son have provided no healing and no peace. And when she springs a surprise visit to her son’s partner Cal (an effectively calm and brooding performance by Damian Vega), she has questions and her own theories. Who gave her son “The AIDS,” as she calls it? And by the way, who made him gay? There is no way he would choose this life on his own. When he came to New York, he wasn’t gay. That’s it – New York turned him gay.

The wonderful yet infuriating thing about Cal is that he engages these questions with the patience of a preschool teacher after the kids have had sugar snacks. He answers her questions with a matter-of-fact stoicism, clearly not thrilled to have a woman in his house who had no desire to acknowledge him when she should have so many years ago. He loved her son, took care of him at his lowest. Why was he not worthy of a hug?

There are a million questions, yet no easy answers in the play. What is easy to see though is the pain that every character must carry, concrete burdens slung across their backs and weighing them down as they trudge through life.

Except Cal isn’t trudging anymore, which hurts Katharine, understandably so. He has found love with Will (a delightfully sharp Max Tachis), a man about 16 years his junior, and they have a son, Bud (a delightfully jovial Izaiah Gutierrez). That last fact speaks to a life in Cal that has seen the highs and lows of living as a gay man. He certainly spent many a night holding Andre through cold sweats and colder tears. But now, there’s a husband? Not a lover (too illicit), a partner (too law firmish) or a boyfriend (high school labels, nope). Cal’s younger days were lived in fear and loathing, but now, he is afforded the dignity of calling someone his husband in their Upper East Side apartment loaded with art and culture (the usual brilliant set design by Ron Gasparinetti).

Things are infinitely more painful for Katharine, and in the hands of Bogovich, she plays each moment with gorgeous precision. What makes her performance so strong is that she fluctuates in each pained world with maximum effect. Each moment offers its own powerful transition, and even though she plays a character who may be hard to empathize with, she ultimately finds her character’s heart, revealing Katharine’s universe, which is deliciously complex.

The power in this play are in the intentions of each character. While Vega’s Cal exhibits the patience towards a woman who clearly has worn out her welcome, Tachis’ Will goes right at her, which makes sense. A man not yet 30, Will has spent much of his adult life empowered by society, by a Supreme Court decision that validates his love for whomever he chooses. But Cal takes a different tact – when Katharine thunders on about the lack of acknowledgements for the mothers who had to see their children succumb to AIDS, Cal finds that extra helping of heart.

There are no easy answers that are offered, and in the hands of this tight cast, it’s what makes the drama so profound. Each actor takes their turn playing the enigma. But the magic of Andre is how he prepared each of them for a life without him as flights of angels sang him to his rest, the memories of a life that nowadays, might even allow a simple cookie to taste a little bit sweeter.

City Lights Theater Company presents “Mothers and Sons”
Written by Terrence McNally
Directed by Jeffrey Bracco
The Word: A complex piece where nothing is always as it seems as rich characters piece together the voids in their life, wonderfully executed by a small, tight cast.
Stars: 4.5 out of 5
Running time: 100 minutes, no intermission
City Lights Theater
529 S. Second Street, San Jose, CA
Tickets range from $23 – $44
For tickets, call (408) 295-4200 or visit cltc.org

One Reply to “Review: No easy answers in strong ‘Mothers and Sons’ at City Lights”