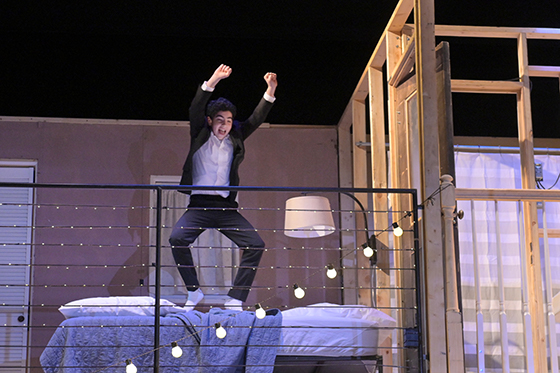 There is always a moment when a person, a couple or a family walk in and see their new digs fully unoccupied. It is in this moment that the new tenants fantasize over the blank canvas. Once the boxes are unpacked, pictures occupy the wall, the refrigerator is stocked and the first meal is consumed, that house will soon become a home.

A physical house is temporary, but a home lasts forever. Or at least the memories last forever. Joy, loss, pain and the mundane all combine to create lasting snapshots both grand and not-so grand.

Geoff Sobelle’s entirely compelling play “Home,” which is entering its final weekend at Berkeley Rep’s Roda Theatre couldn’t start off more mundane if it tried. The stage looks like the opposite of a play beginning to start, more like one that just saw its set removed after closing night. And into this barren waste of black space enters Sobelle, who kicks off the festivities by stapling plastic to a wooden frame.

It is from this odd tension that the magic of the play unfolds in both literal and figurative ways. Shortly after the frame is balanced, much more complicated magic unfolds, created by Sobelle and seven other cast members who appear on the stage and engage with the material without saying a word. Director Lee Sunday Evans has taken Sobelle’s creation and keeps the show moving at a brisk pace, giving multiple levels of eye candy to the play’s structure.

In the 105 minutes that the play lives in the space, an entire life cycle of a house is built from nothing. Not only are there physical structures and steps, but this house features two stories, electricity, pictures on the walls and running water. The only words that come from the stage are from the wonderful balladeer and guitarist Elvis Perkins and his many original, insightful compositions.

Once the house is built, the home can commence. And commence it does in every conceivable way possible. So much of what our homes do is provide the necessities for survival, and not just in the keep us warm sense. Take the simple and practical nude parade of towels and showers, the daily dance of a morning fight with the mirror in order to maximize one’s personal appeal, or just simply eating cold Chinese food out of the box in a darkened room after a long day.

The play goes in some thrilling and wild directions that involved many of the audience members who are playing multiple roles. This is where the house explodes with energy, with lights strewn all throughout the Roda Theatre. While this takes place, more and more characters magically appear. There are celebrations of the wedding variety, parties out of control, wine being slammed by the case, and full-blown pillow fights.

The nature of the narrative’s creation is thrilling beyond words, quite literally. It is a piece that would benefit from multiple viewings because every audience will see a show that maintains the same structure but experienced differently. This home has a loaded life cycle, but more importantly, it’s one that is shared with the audience members. Some of them even tell their own memories of the homes in which they grew up in. All the while others pack boxes, ready to take those memories to their new places of habitat, whether above or below the earth.

A home is something that exists on many levels, and so many touchstones are found within Sobelle’s fantastic creation. By exploring the difference between a house and a home, the potential for this piece to become personal for the audience is enormous. We strive for a house yet we yearn for a home. A house is tangible, a home is an ideal.

When looking at the wide array of colorful characters on the stage, the audience members in full get up, from cops to fish (yes, fish), I couldn’t help but think about the folks I passed on the way to Berkeley, those who are homeless, living on the street in constant fear of what the next day will bring. From the homeless encampments in San Jose to those who hover near Bart, seeing folks who are tired and beaten is crushing. Based on that community, their lack of a house or anything resembling one is painful.

To grow up in a world without a home is devastating. Maybe that’s why we don’t call them the houseless – homeless tells a truer story.

Berkeley Repertory Theatre presents “Home”
Created by Geoff Sobelle
Directed by Lee Sunday Evans
The Word: The dawning and twilight of a home is explored through movement, ideas and music, and it is wonderful.
Stars: 5 out of 5
Through April 21st
The Roda Theatre at Berkeley Rep
2105 Addison Street, Berkeley, CA
Running Time: One hour, 45 minutes with no intermission
Tickets range from $30 – $97
For tickets, call (510) 647-2949 or visit www.berkeleyrep.org

One Reply to “Review: Warmth, joy and the mundane are found in wonderful ‘Home’”