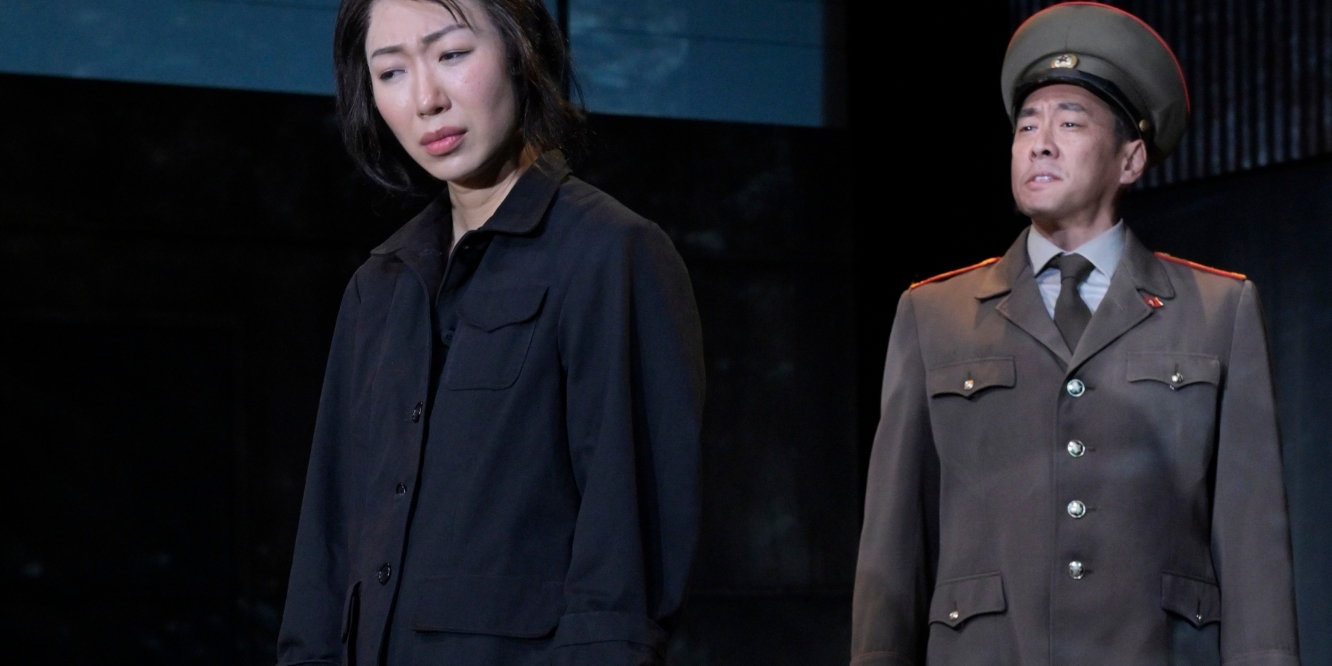 Close your eyes and feel the waves.

There is very little more soothing, more life-affirming than hearing a wave crash along a shore line. The delectable beauty of the fiendish, angelic swell fills the atmosphere with peace and warmth.

For Hanako and Reiko, there is thrill in these waters. Yet after a dare and a quarrel, a conflict which put them at the shoreline face to face with waves as big as “Godzilla” and “Mt. Fuji,” the waters grab hold of Hanako and take her away.

There is plenty to like about Berkeley Repertory Theatre’s production of Francis Turnly’s “The Great Wave,” making its United States premiere. And while the piece is directed firmly by renowned stage tableau artist Mark Wing-Davey, the play itself doesn’t move through space with a smoothness. The story and its potential are compelling. But the pieces to the puzzle have trouble fitting together, a production that doesn’t always connect.

The storyline itself does not lack for intrigue. Hanako (Jo Mei) and Reiko (Yurié Collins) are sisters who enjoy snacks and music after school. They are also friends with a compelling dude, the charming Tetsuo (Julian Cihi), a boy who is sweet on Reiko and vice versa. The two young charges mostly engage in banal talk about music and cool rock bands. That is until a dare emanates from Tetsuo, a dare that ultimately haunts him for years and years.

What takes place is a geopolitical caper that lands Hanako into the darkness of North Korea, where a single smiling photo of six-decade North Korean leader Kim Il-sung sits in her new home, an interrogation room where she is inculcated fully at every moment. It is with a pulsating quickness that the teenager must grow up and survive by any means necessary. There will be fellow North Koreans to educate and orders to be followed. And her secrets will be shielded from a husband with his own skeletons, as well as a child who dreams of the outside world, but will settle for Pyongyang if necessary.

Where the play works wonderfully is in the progression of time. The play functions as quite a rollercoaster that spans more than 20 years, a sweeping epic that makes one believe that a happy resolution lingers around the corner, with that belief extinguished time and time again. In this sense, the production allows for the empathy of Reiko and her mother Etsuko (Sharon Omi), who are driven by hope, a hope that becomes more tangible with each scene until it is extinguished.

Other scenes are filled with more effectiveness, capturing some interesting minutiae of the mysterious country’s casualties. Hanako’s husband Kum-Chol (Stephen Hu) is loaded with dread, and in one haunting scene, stuffs himself full of food, which is a loose term. Food looks like white glue paste that he devours, making himself sick along the way.

And in what may be the most effective scene of the show, an aged Reiko and Etsuko make a video for Hanako. The pain in all of the family is palpable, a gripping moment that makes you yearn for the happy ending they have spent years working towards.

There are two dynamics that take away from the story’s effectiveness. The first is the dialogue in stretches. Consider a scene late in the play, where Etsuko, Reiko and Tetsuo arrive to the office of Japanese government official Jiro (Paul Nakauchi). The scene’s dialogue is devoid of any truth, rather utilizing cheapened ploys to provide audience with more exposition. Other than the fact that we hear names of the missing Japanese who are certainly in North Korea in a passioned plea from Tetsuo, actions are seemingly supposed to happen because of what, osmosis?

In various moments, the dialogue takes away the actor’s potential to play scenes with required truth, relegating the acting to some surface-level performances. The aforementioned scene pushes against the effectiveness of the naturalistic acting style that an audience must connect with.

The second is the transitioning. Aside from an unfortunate accident with a door on opening night after a piercing scene, the plethora of shifting transitions were a bit rough, with lots of noise coming from both the stage right and left wings immediately after a scene.

There is a lot to like about “The Great Wave.” Both the all-encompassing sound design from Bray Poor and Chika Shimizu’s scenic design are top notch. And the show, running at a robust two hours and 45 minutes, does not feel long. Yet ultimately, the piece loosens when it should grip and retreats when it must compel.

There are mysteries and secrets in those great waves, but more truth is needed in order find them.

Berkeley Repertory Theatre presents the United States premiere of “The Great Wave”
Written by Francis Turnly
Directed by Mark Wing-Davey
The Word: A compelling storyline doesn’t fully take root in this story about a family who never loses hope.
Stars: 3 out of 5
Through Oct. 27th
The Roda Theatre
2015 Addison Street, Berkeley, CA
Running time: Two hours, 45 minutes with one intermission
Tickets range from $29.50 – $97
For tickets, call (510) 647-2949 or visit www.berkeleyrep.org