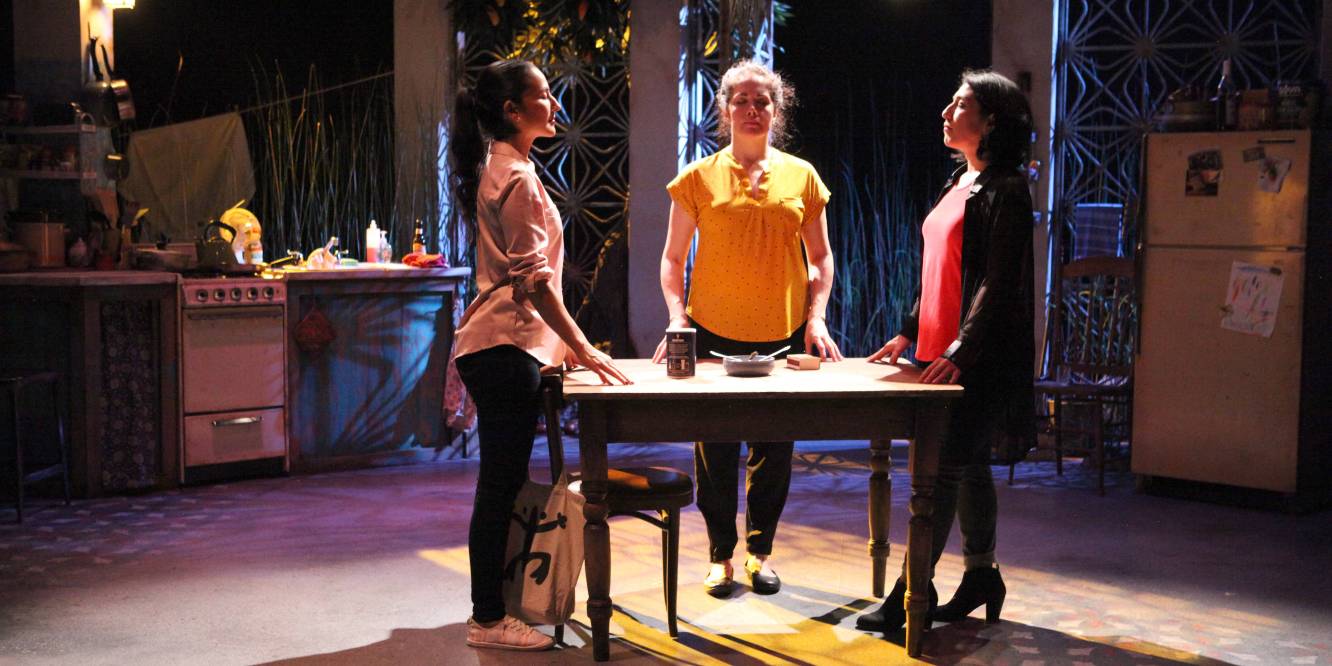 Which begs the question – Why can’t we eat the mangos?

“For me, it’s evocative of the idea of forbidden fruit,” said Pérez González. “There was a mango tree in my abuela’s backyard, and we have these myths and ways that we learn what is dangerous and what is not, what we should do and what we shouldn’t.”

The play is set just outside of San Juan, Puerto Rico. As a hurricane begins to decimate a small town, three sisters take turns caring for their very ill father. While engaging in this care taking, secrets and truths come up from beneath the surface and the sisters examine what it means to stay true to themselves and their homeland.

In addition to portraying a family drama, the story looks at how the sisters ultimately get revenge.

While the play started off as a few scenes, it was further developed by the Sol Project, the national initiative formed in 2016 to help champion works by Latinx playwrights in order to get more diverse plays on regional stages nationwide.

The show received further development at Sundance labs, stewarded by director David Mendizábal, who’s been with project for the last three years. As the play continued its journey, Pérez González has beamed with pride in seeing his family drama giving a strong snapshot of life as a Latinx family.

“The play explores a few things that are really specific on a more cultural level, looking at the sense of duty I was raised with and my obligation to perform sonhood,” said Pérez González. “In most of my work as a playwright, I often examine what love looks like.”

Rituals inside Puerto Rican families is something Pérez González embraces, rituals such as asking for a grandmother’s blessing on a forehead, given with a kiss. This duty means a lot to him and informs how he crafts the world that his characters inhabit.

He is also not crazy about some of the things that are perceived as funny within the culture and uses his play to explore those dynamics.

“My siblings mean a lot to me, and as time passes, we would die and kill for each other, so my play is a little darker and we talk about violence and culture,” said Pérez González. “If you look at jokes about chanklas, we know that it’s a joke and it’s funny, but I do think there is great harm in laughing it away. Those specifics really resonate in the play.”

What also resonates in the play is how Pérez González views the world through a queer lens. The 37-year-old queer playwright is finding his voice and wants to use it to challenge every type of audience at every turn.

“For me, queering is about breaking down binaries and challenging norms and assumptions,” said Pérez González. “There’s something fundamentally queer about my aesthetic and this play, and I am writing this as a male body person being one of three sisters. There’s something about projecting myself into a sisterhood which is queering of the play.

“The play touches on some underlying and specific queer themes that Latino families know but don’t speak of. It’s a queer aesthetic that I can’t avoid and is my approach to my work.”

Receiving this premiere at the Magic, a theatre known for its approach to developing new works, is very special to Pérez González. Jaunting over to San Francisco in his teens when he lived in a Sacramento suburb was always a fun adventure, and now being produced in the City for the first time means the world to him and his career.

“The Magic is such a name and such a magical place, a jewel of theatre right on the Bay. It’s such a vibrant home for artists of all walks of life, and now I’m here sharing my play with the city. My little teen self is jumping for joy.”