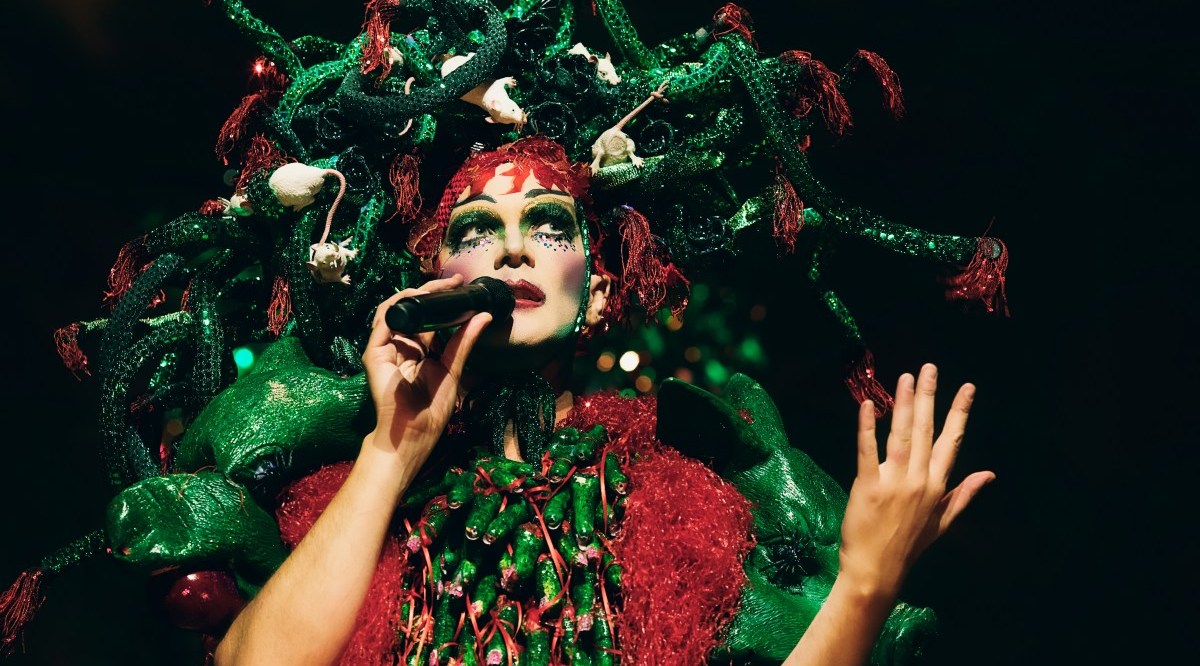 For the past 10 years, Matt Ray has had a front row seat to a genius performer in the literal sense. And in an example of incredible staying power, one of those seats lasted for 24 hours straight.

That’s because Ray has served as the music director to Macarthur Genius Grant recipient and energy extraordinaire Taylor Mac, a job that builds performances anywhere from two hours to 24. As in 24 hours with minimal breaks.

And every arrangement comes directly from Ray.

Mac, 45, is a powerful queer performer who rails against the gender binary, choosing instead to go by the self-proclaimed pronoun “judy” instead of him or her. And after a host of accolades, including an Edward M. Kennedy Prize for drama and a Pulitzer nomination, Mac is returning to San Francisco to present a twist on some holiday classic tunes.

“Taylor Mac’s Holiday Sauce,” now playing at the Curran, is a homecoming of sorts for Mac, who performed his 24 hour piece a year ago at the same venue, but in four, six-hour increments. Mac also grew up in Stockton, attended San Francisco State University for a spell, and even performed in the longest running Bay Area production “Beach Blanket Babylon” in San Francisco before heading out to New York.

The show, which is tagged as reframing “the songs you love and the holidays you hate,” runs through Dec. 1st

For the 46-year-old Ray, who resides in Brooklyn and has a degree in jazz from the Oberlin Conservatory of Music, one of the joys of performing and collaborating with Mac is that they share a vision of the world, which is affirmed through the music they make.

“His outlook and his politics and his sort of view of the world jive with mine, and the way we work artistically is similar,” said Ray. “We get in a room, figure out how to do things, try things out, and I’m left to write arrangements. It’s a two-way street of ideas, and it’s a lot of fun.”

The performance artist Mac is dogged in his pursuit of artistic challenges, and Ray remembers how he responded to Mac when the topic of a potential 24-hour show was broached.

“He is so determined and such a visionary,” said Ray. “One day I just woke up and realized I was going to write 24 hours of arrangements.”

When that show came in late 2016, Ray wasn’t thinking about much more than simply surviving the experience. To their surprise, the New York Times sent Pulitzer winning critic Wesley Morris to cover the show, which played at St. Ann’s Warehouse in Brooklyn. Turns out that Morris loved it, calling it “one of the greatest experiences of my life.” The reach of the Times pushed Mac and company into a new level of social consciousness.

Mac and Ray continue to experiment with their art to create music that is full of unpredictable, organized chaos. While Mac makes his living on the experimental, Ray takes an approach where his ego is left just outside the door.

“One of my biggest challenges is understanding that not every choice I make is going to be permanent,” said Ray. “I’m not somebody who writes and gets super worked up, because I have to write with a flexibility in mind. There may be arrangements where sections can be cut, instruments can be added, and we need texture and depth more than we need notes.”

Communication in the building process is the key.

“We have lots of discussions about it. Taylor is so gentle when going along with things, but he is specific about what he wants, so I have learned to write flexibly. When you write that many arrangements, you have to let things go. It’s the beauty of doing so much work.”

Mac is one of the pioneers of queer performance, crossing into the mainstream in huge ways, most notably appearing on “The Late Show with Stephen Colbert” just last month. As a performer who pushes hard against the gender binary as he champions gender fluidity, Mac’s magic is in his performance art, which is unapologetically fierce.

“Mainstream gay content on television didn’t always exist, and it’s not crazy to say this, but there is so much more gay visibility on television than there used to be,” said Ray. “He is taking risks because he is allowed to take risks in gender presentation. It’s flamboyance with a purpose and it’s campy and fun, but it’s also deep and incisive, visibility with a purpose.”

That visibility goes right to the heart of young people who Mac and Ray hope to continue reaching.

“When queer kids come to our show, that’s the first chance for them to see someone like Taylor in a legit environment. The intelligence of Taylor is winning people over, and it’s never compromising.”